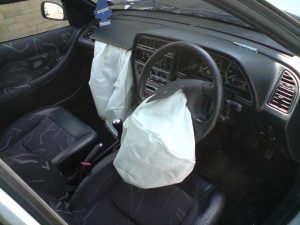 The Detroit Bureau (8/21, Einstein) reports that the failure of an airbag “in a new Volkswagen Tiguan could lead to a huge expansion of the ongoing Takata recall – something that has already impacted more than 33 million vehicles sold around the world.” Two US senators are calling for a recall of all vehicles using its airbags, which could results in millions of additional cars being recalled. The latest development comes in response to Volkswagen alerting the NHTSA “about the faulty deployment of a Takata airbag on a 2015 model Tiguan sport-utility vehicle” on June 7th, the article reports. NHTSA Administrator Mark Rosekind last month “told TheDetroitBureau.com the agency is taking a broad look at older airbags to see if they might suffer greater malfunctions as they age,” according to the article.