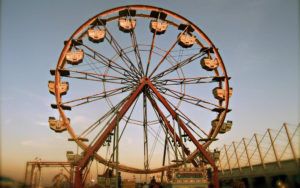 We should all expect to be safe when enjoying the rides at the State Fair, or other amusement parks.  Recent legislation is on its way to the Governor that should make us all a little safer.

House Bill 39 was crafted in response to a 2013 accident at the North Carolina State Fair that injured five people on The Vortex. Investigators said a key safety feature on the ride had been disabled, and the operator pleaded guilty in June to criminal charges in the case. The ride owner still faces charges.

The bill includes a five-fold increase in the civil fines for improper operation of an amusement ride – it could be for not having a safety certificate, using an untrained operator or not having the required records of operation – and creates a misdemeanor offense for violating the regulations and a felony offense if someone dies or is seriously injured because of the violation.

Rep. Red Davis, R-New Hanover, said the initial House bill called for a 10-fold increase in the fines, but the Senate sought only a doubling of the penalties. So, the two chambers compromised on the final five-fold increase, he said.
Read more.